In Color has designed the wrap for the Santa Barbara Bowl's new water station, donated by Jack Johnson's organization. The backdrop image was taken by A. Arthur Fisher. 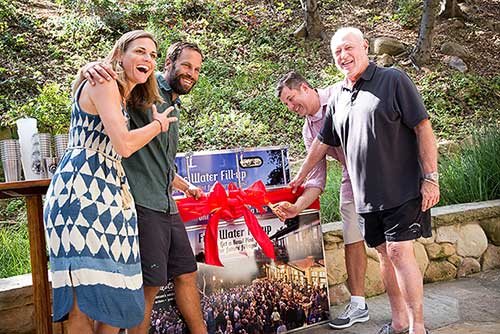 Jack Johnson with Rick Boller. photo Larry MillsSanta Barbara, CA – On Tuesday, musician and environmentalist, Jack Johnson presented the Santa Barbara Bowl today with a custom Water Refill Station, in support of the Johnson’s All At Once Sustainability Award, which recognizes venues making a strong commitment to green practices and the environment. Water Refill Stations will also be presented to the two other award winners, the Merriweather Post Pavilion in Maryland (IMP Presents), and the Nikon at Jones Beach Theater in New York (Live Nation).

Last December, the Santa Barbara Bowl with promoter Nederlander Concerts, received an inaugural All At Once Sustainability Award in the “Green Leader” category, for ongoing excellence in waste reduction and sustainability and for making every effort to meet Johnson’s Environmental Rider during his 2014 From Here To Now To You Tour. As a result of the award and water refill station, fans will now be able to refill reusable water bottles and cups from the venue, cutting back on plastic waste at the Santa Barbara Bowl shows.

The Bowl is being recognized as a leader in venue greening and for implementing best practices, piloting new initiatives, and setting the stage for others to follow. The Greening the Bowl campaign aims at making the venue as close to carbon neutral as possible by decreasing the Bowl’s ecological footprint. Recent greening initiatives include removal of non-native plants, a bike valet service, solar power, and implementation of waste-diversion recycling and composting programs.

Additionally, as part of Jack Johnson’s 2014 shows, the Santa Barbara Bowl in collaboration with LoaTree, launched the innovative #MyPintAndMe initiative to reduce single-use disposable plastics by selling customized pint cups. Bowl patrons can bring their pint cups to every Bowl show and receive drink discounts for the life of the cup. Since the inception of the program the SB Bowl has seen cost savings from the reduction in plastic cups purchased and waste hauling fees

Rick Boller, Executive Director Santa Barbara Bowl Foundation, states “We are honored to receive the All At Once Sustainability Award. We have enjoyed our on-going partnership with everyone on Jack Johnson’s team and their support and assistance in launching all of our Greening the Bowl initiatives. We mostly want to recognize and thank our patrons for their active participation with the MyPintAndMe program. It is exciting to have so many supporters do their part in reducing over 10,000 plastic cups since Jack Johnson’s concerts in 2014.”

Johnson, whose music career began in Santa Barbara, is proud of his hometown venue’s greening efforts and specifically their commitment to reducing single-use plastics. “Being an ocean loving community we all appreciate the Bowl’s leadership in keeping plastic out of the waste stream, knowing that so much of it finds it’s way to the sea,” said Johnson.

The award ceremony is timely, as Johnson recently returned from the 5 Gyres SEA Change expedition from the Bahamas to Bermuda, conducting research on plastic ocean pollution, where he was able to see environmental impacts first- hand and discuss solutions with leading scientists, artists, and ocean advocates. While in the Bahamas, Johnson was also designated as a Goodwill Ambassador for the United Nations Environment Programme to help promote environmental causes, including plastic pollution initiatives.

In addition to recognizing outstanding green venues like the Santa Barbara Bowl, Johnson continues to improve his own sustainability practices on the road. The 2014 From Here To Now To You Tour eliminated over 18,392 single-use plastic bottles with water refill stations and reusables, supported 35 local farms with the purchase of locally grown and organic produce, sourced over 10,054 gallons of sustainable biodiesel and offset an estimated 2,462,600 pounds of CO2 through green touring and fan participation. Through Johnson’s All At Once campaign, the tour supported over 150 community groups focusing on plastic free initiatives, sustainable local food systems, and other hands-on environmental projects.

For more information visit: www.jackjohnsonmusic.com/greening and www.allatonce.org
For more information, contact: Brittany Pearce, This email address is being protected from spambots. You need JavaScript enabled to view it. Fresh and Clean Media, 310.313.7200

Again, I am speechless. Epic is an understatement.

Dear Superman, you are my hero. Thank you!

Thanks for all your fine work and for always making us look good.

Wow! This is totally amazing! I love it! Great Job! I am bowled over. I had no idea you would be able to get so much done. It is really terrific.

I just wanted to say thank you so much for creating a visual delight that FULLY compliments the logo!! Way to go Art!!

Those are honestly some of the best pictures I have ever seen.

In Color is a registered trademark. All Content Copyrighted.

Email Us
Copyright In Color